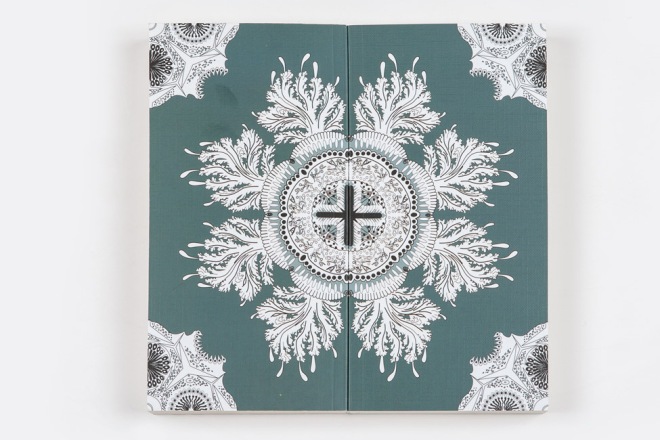 Ruth Sacks´ artist book Twenty Thousand Leagues Under Seas is made up of a series of textual and visual interventions within French author Jules Verne’s 20,000 Leagues Under the Sea (1870). Sacks´ main interest in this now-classic late 19th century tale of underwater travel in the fantastical submarine, the Nautilus, lies in the manner in which Western attitudes of entitlement of power are embedded in Verne’s narrative. Early English translators of 20,000 Leagues revealed comparable imperial tendencies in their efforts to make Verne’s text more palatable to a British audience. Beginning with Mercier Lewis’ inaugural translation (1873), the French author’s antagonism towards Britain was obscured and erased. Further liberties were taken in the removal of vast swathes of the book, with alterations made at will. Taking these initial English translations (some of which are still in circulation today) as a starting point, her work treats the process of translation as one of personal interpretation.

Twenty Thousand Leagues Under Seas is a contemporary re-working of an early, erroneous English translation of Verne’s French original. She has inserted various additions, removals and embellishments into the narrative in order to accentuate certain political nuances. The Art Nouveau movement, once dubbed Le Style Jules Verne (by Maurice Rheims), is a dominant presence throughout my version of the book. In all of the lengthy descriptions of the submarine, especially her extravagantly luxurious staterooms and art collection, the architecture and interior decór is portrayed as if it were designed by such practitioners as: Hector Guimard, Victor Horta, Émile Gallé, Louis Majorelle and Henry Van de Velde. As the Art Nouveau style only dominated Western Europe for a brief but intense period from 1890 to 1910, this insertion into the narrative is an anachronism, like the Nautilus herself (while prototypes of early submarines had been invented by 1866, they were not yet in use). In using Verne’s 20,000 Leagues as a framing device to ‘house’ the Art Nouveau style, her intention is to draw correlations between the attitudes towards non-Western cultures (particularly those of colonized peoples in Africa) espoused by characters in the novel and those of the Art Nouveau practitioners. In both cases, there is an overriding tone of exoticizing imperialism that I wish to draw attention to. Consequently, in her rewriting of the novel, she have inserted certain narratives describing complex interactions between European explorers and native inhabitants of colonized locations and embroidered those already existing within Verne’s text.